Mars one year ago, on February 18, 2021, and the six-wheeled scientist has other important accomplishments in store as it speeds toward its new destination and a new science campaign.

Weighing roughly 1 ton (1,025 kilograms), Perseverance is the heaviest rover ever to touch down on Mars, returning dramatic video of its landing. The rover collected the first rock core samples from another planet (it’s carrying six so far), served as an indispensable base station for Ingenuity, the first helicopter on Mars, and tested MOXIE (Mars Oxygen In-Situ Resource Utilization Experiment), the first prototype oxygen generator on the Red Planet. 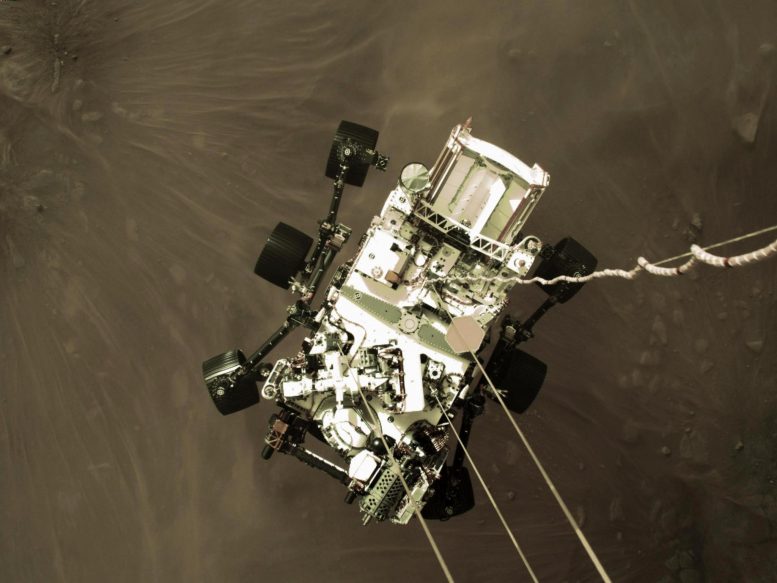 The Mars 2020 descent stage lowers NASA’s Perseverance rover onto the Red Planet on February 18, 2021. The image is from video captured by a camera aboard the descent stage. Credit: NASA/JPL-Caltech

Perseverance also recently broke a record for the most distance driven by a Mars rover in a single day, traveling almost 1,050 feet (320 meters) on February 14, 2022, the 351st Martian day, or sol, of the mission. And it performed the entire drive using AutoNav, the self-driving software that allows Perseverance to find its own path around rocks and other obstacles.

The rover has nearly wrapped up its first science campaign in Jezero Crater, a location that contained a lake billions of years ago and features some of the oldest rocks Mars scientists have been able to study up close. Rocks that have recorded and preserved environments that once hosted water are prime locations to search for signs of ancient microscopic life. 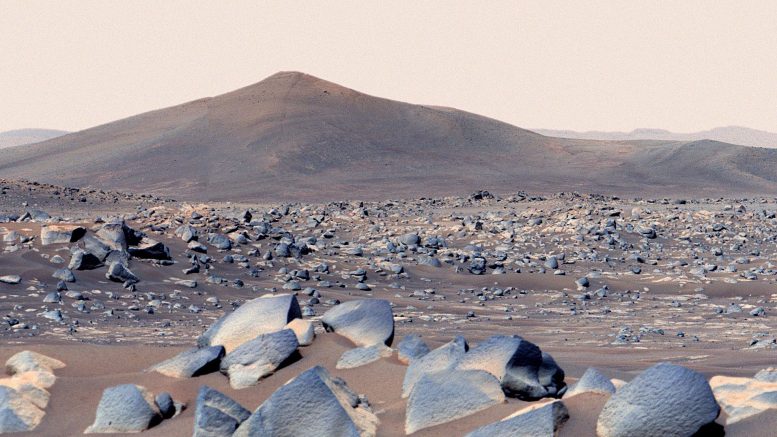 Perseverance snapped this view of a hill called “Santa Cruz” on April 29, 2021. About 20 inches (50 centimeters) across on average, the boulders in the foreground are among the type of rocks the rover team has named “Ch’al” (the Navajo term for “frog” and pronounced “chesh”). Perseverance will return to the area next week or so. Credit: NASA/JPL-Caltech/ASU/MSSS

Using a drill on the end of its robotic arm and a complex sample collection system in its belly, Perseverance is snagging rock cores from the crater floor – the first step in the Mars Sample Return campaign.

“The samples Perseverance has been collecting will provide a key chronology for the formation of Jezero Crater,” said Thomas Zurbuchen, associate administrator of NASA’s Science Mission Directorate in Washington. “Each one is carefully considered for its scientific value.”

Two more samples will be collected in coming weeks from the “Ch’al” rock type (named with the Navajo term for “frog”), a set of dark, rubbly rocks representative of what’s seen across much of the crater floor. If samples of these rocks are returned to Earth, scientists think they could provide an age range for Jezero’s formation and the lake that once resided there.

Scientists can approximate the age of a planet or moon’s surface by counting its impact craters. Older surfaces have had more time to accumulate impact craters of various sizes. In the case of the Moon, scientists were able to refine their estimates by analyzing Apollo lunar samples. They’ve taken those lessons to narrow down the age estimates of surfaces on Mars. But having rock samples from the Red Planet would improve crater-based estimates of how old the surface is – and help them find more pieces of the puzzle that is Mars’ geological history.

“Right now, we take what we know about the age of impact craters on the Moon and extrapolate that to Mars,” said Katie Stack Morgan, Perseverance’s deputy project scientist at NASA’s Jet Propulsion Laboratory in Southern California, which manages the rover mission. “Bringing back a sample from this heavily cratered surface in Jezero could provide a tie-point to calibrate the Mars crater dating system independently, instead of relying solely on the lunar one.”

The mission hasn’t been without challenges. The rover’s first attempt at drilling a rock core came up empty, prompting an extensive testing campaign to better understand fragile rocks. The team also needed to clear out pebbles that had dropped into the part of the sampling system that holds the drill bits.

Perseverance’s airborne companion, NASA’s Ingenuity Mars Helicopter, has proven similarly plucky: It was grounded for almost a month following a dust storm before recently resuming its flights. Originally slated to fly five times, the rotorcraft has successfully completed 19 flights now, providing a new perspective of Martian terrain and helping Perseverance’s team to plan the path ahead.

To the west of “Octavia E. Butler Landing,” where Perseverance started its journey, are the remains of a fan-shaped delta formed by an ancient river as it fed the lake in Jezero Crater. Deltas accumulate sediment over time, potentially trapping organic matter and possible biosignatures – signs of life – that may be in the environment. That makes this destination, which the mission expects to reach this summer, a highlight of the year to come.

A key objective for Perseverance’s mission on Mars is astrobiology, including the search for signs of ancient microbial life. The rover will characterize the planet’s geology and past climate, pave the way for human exploration of the Red Planet, and be the first mission to collect and cache Martian rock and regolith (broken rock and dust).

Subsequent NASA missions, in cooperation with ESA (European Space Agency), would send spacecraft to Mars to collect these sealed samples from the surface and return them to Earth for in-depth analysis.

The Mars 2020 Perseverance mission is part of NASA’s Moon to Mars exploration approach, which includes Artemis missions to the Moon that will help prepare for human exploration of the Red Planet.

JPL, which is managed for NASA by Caltech in Pasadena, California, built and manages operations of the Perseverance rover. 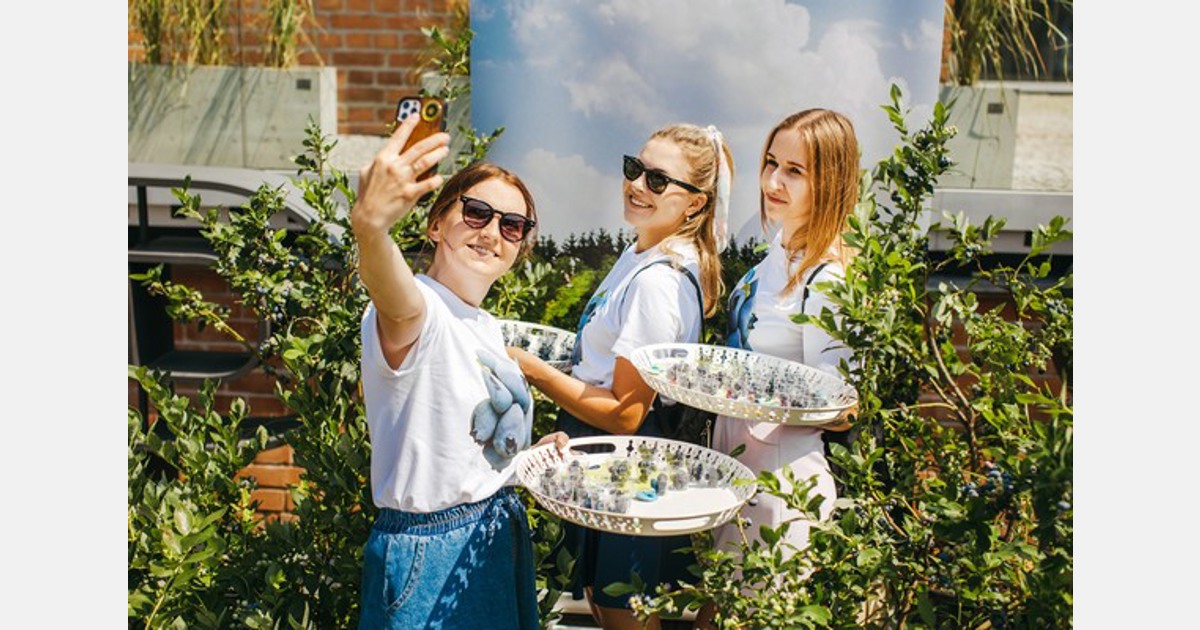